Here is the unboxing of the GoPro Hero 6 black that I got for this venture into drones. I figured I would blog about the unboxing since I will be taking it on vacation. I will be shooting some hiking footage of the Appalachian Trail once I have used it and have some footage to post I’ll update with my thoughts.

The above are the shots of each side of the packaging of the Hero Black 6. Packing looks good and is really functional for GoPro! The packaging on the Hero 6 was not easy to open without tearing the bottom of the box…. Which I hate to do because I like to keep the packaging at least for a little while in case it needs to be returned. The few videos and reviews of this camera are great. The ability to do 4K 60FPS video and the added image stabilization. I am thinking using it 1080p 240 FPS should make filming drones great so you can really slow the motion down and catch it all. The low light performance seemed good as well. The Dual 2.4Ggz/5Ghz for downloads seems this will work well with the high-resolution videos transfers. The app that pairs with it seems nice as well. I will know more once I can dig in and start using it. I look forward to using this on the hike and for filming drone flights.

The plan is to use this as a stationary camera near the objects we will be flying around. I have seen some of that footage before and it looks cool. Just fix it on say the gate and film, everyone, flying though! The Hero 5 black will be used in a similar manner or on the drone if the drone is large enough to carry it. Then hopefully I can do some nice side by side or some other type of editing with the go pro software. I have no idea since I have not used it or even downloaded the software as of yet. I figure I will do that once I have some footage to edit so when I return from the hiking trip!

As you can see in the above pictures it comes in the mounting/attaching housing. That attaches to the mount point in the box which you could save to use as a mount. Once you remove the camera housing you can see the only identifying mark that shows it is a Hero6 is the small print on the charging side of the camera. This camera externally looks identical to the Hero5 except for that small print which I might add is covered up by the housing. The fit and finish of both cameras seem great. I did notice getting the charging door open can be a pain but it might just be that I am not used to doing it 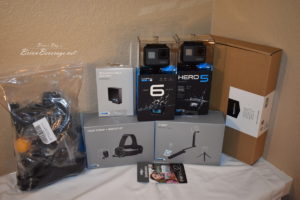 This is all of the GoPro items which consists of the cameras, an accessory kit, spare battery, head mount, folding stick mount and a large carrying case. This will be everything needed to capture some good footage be it with the drones or on vacation! The first thing they will be filming is an Appalachian Trail trip. That should give me a good idea of battery life sd card capacity and video quality. I will write up a blog post about my review of the GoPro cameras and this other stuff including the trip. It should be interesting since this is also my first experience with GoPro. The unboxing and packaging were interesting in itself. The Hero 5 black seemed to be packaged better. The bottom is not sealed with glue it was only the normal bottom that has the insert flap and the round security type sticker. This is much easier to open without tearing up the box. Which I like since you might need to return something and it’s better to have the original box. Hopefully, that does not happen in my case but you never know better safe than sorry. Here are the other pictures of the items opened and laid out.

The box contents are similar just the Hero 6 was harder to open without damaging the bottom of the box. This blog post is just about the cameras themselves and box contents. I will post another that will talk about the other items in the group picture. This will be the large carrying case, the assortment of attachments, extra battery, head mount, folding stick mount and any other mount that I might use. I should also be able to talk about video quality and voice recognition controls. I hope that post will have more info from having used the cameras for a little bit on the trip. Stay tuned more to come on this topic! 🙂