I took the Lab210 drone out to the Park to fly with Pat at oak point park to fly as much as we could before the rain started. I flew one battery and was so excited to try flying through the gate. I loaded my second battery and off I went. I thought let me do a punch out and maybe a power loop attempt. For those that do not know what a punch out is it is basically just going full throttle for a brief amount of time. While doing that a couple seconds in I bumped the disarm switch. Needless to say, it did not end well. For anyone who does not know a drone has an arm and disarm switch. That has to be configured so that in a certain position it will “Arm” the drone or in other words, you must move a switch into a certain position to start the drone so it can fly. I have a prearm switch as well which means you must move 2 switches to prepare the drone for flight. This is a safety measure that will not allow the drone to accidentally come on. The props could cut off your fingers or worse depending on the size of the drone. This same switch is also a “kill” switch if you get into trouble you can move the switch to your configured disarm position and the drone instantly turns off and falls from the sky. This is exactly what happen to me except I was kind of high up in the air and moving rather fast. if you watch the video below it bounced really high after impact.

That fall broke the top plate, stack, and VTX. The stack is all the electronics that are mounted in the center of the drone. It did not break the boards just the standups that hold it all in there! That is not a big deal really it looks bad but was an easy fix. The top plate means you buy a new frame since you cannot buy the one I have in parts. I also need a new VTX which is the video transmitter that sends the video back to the goggles. I had to place an order to China where we purchased these parts and now have a month wait for it all to arrive.

If you read the other blog post about the small drone getting returned.I am now going to build another drone to replace it. I thought I would build a little one at first but since breaking the 5″ drone I am going to build another 5″ with better parts. This one should be crash proof for the most part and has parts here in the US so it will only take a couple days to get replacement parts. The plan is to try and video the build, testing, and first flights. The testing and first flights should be no problem. The build might not be that great of video since I am not set up like the PRO Youtubers it will just be the GoPro mounted over my work area! I will compile a parts list and try to post why I picked those parts. I am really excited to build this new drone its going to be FAST and way more durable. 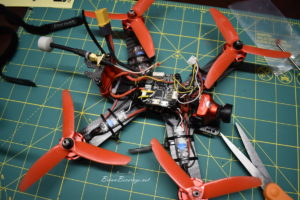